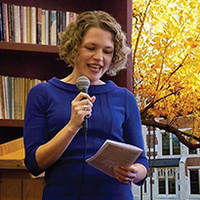 Professor Charlotte Artese holds a B.A. from Yale University and a Ph.D. from Northwestern University.  She is especially interested in Shakespeare’s borrowings and lendings, how he adapted his sources and how later artists have adapted his works. Professor Artese is currently writing about Shakespeare’s use of folktales. Her interests also include gender and race in early modern literature. This talk is entitled, "Shakespeare's Snow White: Cymbeline and the Folktale".