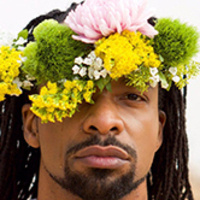 Jericho Brown is the recipient of fellowships from the Guggenheim Foundation, the Radcliffe Institute for Advanced Study at Harvard, and the National Endowment for the Arts, and he is the winner of the Whiting Writer's Award. Brown’s first book, Please (New Issues 2008), won the American Book Award. His second book, The New Testament (Copper Canyon 2014), won the Anisfield-Wolf Book Award. His third collection is The Tradition (Copper Canyon 2019). His poems have appeared in The Bennington Review, Buzzfeed, Fence, jubilat, The New Republic, The New York Times, The New Yorker, The Paris Review, TIME magazine, and several volumes of The Best American Poetry. He is an associate professor and the director of the Creative Writing Program at Emory University.

Absolutely dynamic, inventive, funny speaker and provocatively interesting poet. Some of my students told me this was their first poetry reading and they were blown away.

Jericho rocked my world, as always. What a great poet, speaker, supporter of writers, friend, etc. I wanted to stand up and applaud more than once during the reading. Watching the expressions on the audience's faces was wonderful--they were laughing, crying, glowing--altogether a fantastic event.