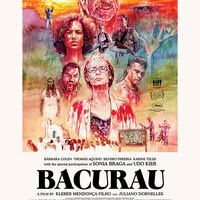 In honor of Latinx Heritage Month, the Gay Johnson McDougall Center for Global Diversity and Inclusion , the Gue Pardue Center for Leadership and Service, and the Spanish department are pleased to present the Spanish Film Club Festival. We will be releasing a new film on Sep. 13, 20, Oct. 4 and 18 on our very own Spanish Film Club Website so you can watch at your own leisure throughout the day it is released for one week.

A small village in the Brazilian sertão, mourns the loss of its matriarch, Carmelita, who lived to be 94. Days later, its inhabitants (among them Sônia Braga) notice that their village has literally vanished from online maps and a UFO-shaped drone is seen flying overhead. There are forces that want to expel them from their homes, and soon, in a genre-bending twist, a band of armed mercenaries led by Udo Kier arrive in town picking off the inhabitants one by one.