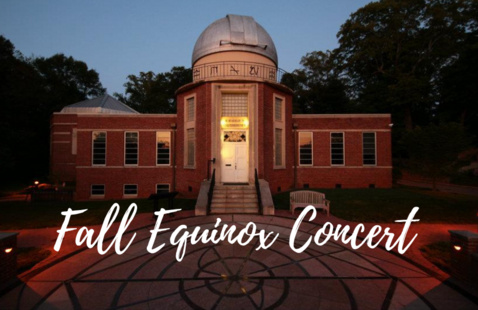 The William A. Calder Equinox Concert Series honors Professor William A. Calder's legacy as a professor, musician and citizen at Agnes Scott from 1947 to 1971. At the time of the Fall and Spring equinoxes (the September and March Open Houses), the gathering features a concert given by a visiting musical group or solo musician. Following the lecture or concert, guests are invited to stay for a planetarium show and (weather permitting) observations with Observatory telescopes, including the historic Beck Telescope. Planetarium shows typically include fun astronomy facts and a look at what is visible in the local sky that night. Masks are currently required at indoor events. Thank you for helping to keep our community safe!

This year’s concert features the duo Vox et Digitas performing a Shakespeare program which offers comparisons of how text is set by different composers and groups the pieces by the shows they come from. It also includes some of the original tunes from Shakespeare's plays.

Pianist Ariel Montero earned a Bachelor's of Music in Music Education with a Concentration in Piano from Kennesaw State University in 2013. While at KSU, she also earned a Global Learning Certification as a result of her student teaching experience at Colegio Menor de San Francisco de Quito in Quito, Ecuador. From 2014-2021, she taught music theory and class piano at the Cobb County Center for Excellence in the Performing Arts, a magnet school for the arts housed at Pebblebrook High School, where she was also a staff accompanist. She remains active in the Atlanta area as a freelance accompanist and private teacher.