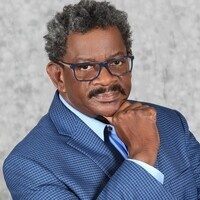 Dwight Andrews, composer, musician, educator, and minister, joined the Emory College faculty in 1987. A native of Detroit, Dr. Andrews is Professor of Music Theory and African American Music at Emory University and Senior Minister of First Congregational United Church of Christ in Atlanta. He received his Bachelor's and Master's degrees in music from the University of Michigan. He continued his studies at Yale University, receiving a Master of Divinity degree and a Ph.D. in Music Theory.

While at Yale, Andrews served as Associate Pastor of Christ's Church and was on the faculty of the Music Department and African American Studies Program for over ten years. He also served as the Resident Music Director (1979-1986) at the Yale Repertory Theater under Lloyd Richards. It was during this period that his fruitful association with playwright August Wilson began. As a result, Andrews served as music director for the Broadway Productions of August Wilson's Ma Rainey's Black Bottom, Joe Turner's Come and Gone, Fences, The Piano Lesson, and Seven Guitars. He also served as Music Director for the Broadway revival production of Ma Rainey starring Charles S. Dutton and Whoopi Goldberg and collaborated with Director Kenny Leon on the Broadway production of A Raisin in the Sun, starring Sean Combs and Phylicia Rashad. His work has been presented at professional theatres throughout the United States and Great Britain.

He is presently working on a study of Black Music and Race based on his Harvard lectures and a manuscript on spirituality in the works of John Coltrane, Mary Lou Williams, Sun Ra, Dave Brubeck, and Albert Ayler.

This event is free and open to the public and made possible by The Dabney Adams Hart Distinguished Visiting Humanities Professorship Fund was established in 2003 by Madeline and Howell E. Adams, Jr. in honor of his sister, Dabney Hart '48.