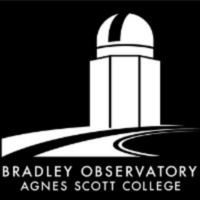 Bradley Observatory was built on the campus of Agnes Scott College in 1949, and dedicated in 1950. It was built largely to house the newly acquired Beck Telescope, a 30-inch reflector that was, until 1972, the largest telescope in the southeast. During the years 1947-1972, the astronomy program was led by Dr. William A. Calder. Our equinox concerts are now named in his honor. The original home of the Atlanta Astronomy Club, Bradley Observatory was a midcentury expression of a longstanding dedication to astronomy that goes back to 1901 when Prof. Charles Olivier was on the faculty of the College and observed a nova "with an opera glass". He went on to found the American Meteor Society in 1911, and continued his career at the University of Virginia in Charlottesville (1914-1928). In this talk, Chris DePree will discuss the College's century-long dedication to astronomical teaching, outreach and research, and the Observatory's important role in those efforts.

Chris De Pree is the Director of Bradley Observatory and Charles A. Dana Professor of Astronomy at Agnes Scott College. He has been at the college for 25 years (1996-2021). His research focuses on high mass star formation in the Milky Way Galaxy, and his Massive Star Formation Group consists of four undergraduate students who are learning to reduce and analyze radio frequency data from the Very Large Array. He is co-author of an upcoming popular science book, "Astronomical Mindfulness: A Practical Guide to Reconnecting with the Sun, Moon, Stars and Planets" that will be released in January 2022. In July 2021 he will take a leave of absence from the College to begin a 2-year position at the National Radio Astronomy Observatory in Charlottesville, VA as Director of the National Radio Dynamic Zone (NRDZ) project.